Journal-type entry. Update on my quest’s progress. The difficult task of a complete rewiring of the brain.

So, changing habits is harder than I thought it would be and this challenge is exactly just that; a big mothef*cker of a challenge.  But, that’s okay because that was the purpose of it.  So far I have found that it is easy to keep focused on a new activity for a couple of days, but trying to simultaneously turn all these different objectives into new habits and practice them daily, bi-daily or weekly is a demanding process and requires a total rewiring of how I’ve operated over the last couple years, in some instances, over the entirety of my life.

For instance, getting into the gym and exercising daily has been pretty easy so far.  However, only moderate success has been had when trying to facilitate running, weights, hiking, yoga, etc., into a balanced exercise routine.  I find that I can do one or two of these extremely well, but when I do the one well the others don’t get prioritized properly.  And that’s just within the Physical Health vertical that I have, so far, seen the most personal growth within.

Below is how I have done in each category so far this past week:

My Sobriety:  So far, so good.  I haven’t touched booze, and have very little, if any, desire to do so.  It is harder when out and about on town.  Drunk people are definitely more drunk than funny when you are not on their level, which tends to make you want to drink, but I don’t foresee this really being that difficult.  With that said, staying out late with people who are partying hard will likely get clipped from my routine.  After spending Saturday night out with the girlfriend until approximately 2 AM, I was not pleased with how tired I was on Sunday and the lack of productivity that came along with that exhaustion.  Yesterday I was a bit crabby and irritable because of this.

Physical Health:  Killing it so far.  Weight lifts are going up across the spectrum.  My weight is down about 10 lbs.  My stamina and intensity is increasing quickly.  I leave the weight room feeling simultaneously destroyed and euphoric.  I was able to easily hike 19 miles with 6000′ of elevation gain and 7800′ of loss last week (see posts on The Enchantments), and even ran the last 5-6 miles.  I need to put more emphasis on stretching and yoga, although I have been stretching in the sauna, shower in the morning and between sets at the gym.  That is going to be a higher priority this week.

My neck and shoulder are giving me pain on and off… Need to resolve this.  It’s been going on for months.  Also is why I am putting such an emphasis on yoga.

Mental Health:  I practiced some light meditation throughout last week, but not as much as I had hoped to.  One time-save I found is to do my meditation in the sauna after a hard workout.  Doing that pretty much clears the mind and leaves you feeling on Cloud 9 afterwards, plus it kills two birds with one stone.  I would also include my hike through the Enchantments as a boost for my mental health.  There was a drawback though, after doing that physically taxing of a workout I was left in somewhat of a mental fog throughout the middle of last week.  My energy has been pretty good since, however.

My general attitude was mainly up last week with a couple of lulls.  Waking up this morning I felt like I could take the world on, so that’s a good place to start..  There’s definitely been an underlying feeling of stress from outside forces that I am letting have a negative impact on me and that I need to put to rest.  The resolution would seem to be to either cut off the artery that is feeding the stress or face it head on.  I think that is dependent of where the stress is coming from, outlets like media should be easier to control.  But financial or relationship issues should be taken on aggressively to a place of resolution.

Creativity:  I have mainly been blogging and editing videos for this vertical, but that has actually seemed to give me a creative edge over my prior self and reawakened my desire to write.  I, honestly, think I would like to write a book at some point and  am planning on launching a podcast as well.  I’ve also spent a lot of time brainstorming business ideas and those ideas seem to be getting stronger and better articulated.

“FINANCES & CAREER” CATEGORY HAS BEEN CHANGED:
A good friend of mine, Erik, made the point that finances and career do not go hand in hand and suggested I separate the two of these verticals.  I further liked what Ray Dalio had to say about the topic in his book Principles, how money wasn’t his objective but what followed his passion.  Thus, I have changed Finances & Career to reflect Learning & Career, a category I find that goes hand in hand.  Also, although financials will be a piece of my self-improvement process I will rarely going to post about this vertical, as somethings should be kept private and off the internet.

Learning & Career:  I spent some time reading last week, but have much more improvement to make in this category.  I guess creating the habit of reading is an important step in the process.  This week I will be focusing on this much more than last week.  Also, last week’s mid-week hike kind of threw off a lot of my schedule.  I will not have that same problem this week.

Relationships:  Last week was an interesting week under this vertical.  One of my best friends, Nate, is moving to San Diego for a massive career change and opportunity.  I am beyond stoked for him, however, I am a bit saddened.  His girlfriend, and a good friend of ours, Jocelyn, is not going to be going with, but instead, she is moving in with us.  It will be great having her around and I expect Brandi and her to have an awesome time living together.  Also, I have been trying to make more time for certain people who I have been seeing less and less over the years.

One thing I have been contemplating is:  “What do I bring to the table for my friends?”  I don’t know the answer, but it is something to think about. 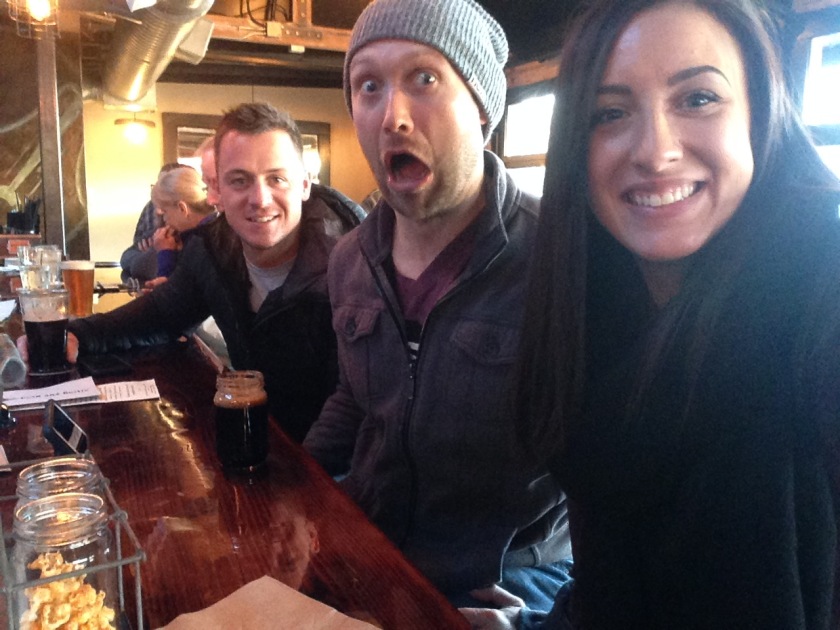 (Picture of Brandi (right), Me (middle), and Nate aka Naterbator aka Babybody (left) – this picture was taken prior quest, don’t judge the beer in front of me.)

Overall, this last week was a lot of fun and I achieved some great things.  I do need to focus more on the overall goal here though.  I have actually come up with an idea to make sure I am “Leveling Up” properly.  The idea is to make a point system where if I accomplish something during the day, I get points based on what it is that I accomplished (i.g. Under the Physical Health vertical:  lifting weights = 1 point; yoga = 2 points; etc).  Then I add them up at the end of the week and see how I did across all verticals.

My biggest challenge so far has been to remove simple distractions that suck the time out of my day.  Getting on Twitter or Flipboard can easily suck hours out of my day and I need to control that impulse.  Once I conquer that, I think there is a lot more I will be accomplishing per week.

Alright, time to take it all on.  Thanks for reading!

Author: a Life to Summit

I am a skier ⛷, hiker, backpacker, summit scrambler, and all around mountain-man 🏔 adventurer. I am a fitness minded, supplement taking, gym ratesque, yoga pose holding, salad eating, kettlebell swinger. I am an in-the-sauna, sweat all over my headphones, meditator. I am a book reading and Audible listening, philosophizing, bad habit to good habit changing, personal growth prioritizer. I am a dad to two bitches, aka Labrador Retrievers. I am an over-thinker, a writer, a hammock junkie. I am a lot of things. View all posts by a Life to Summit